Monday Advice from Editors and Agents: The Golden Triangle of Plotting

Every Sunday James Scott Bell blogs about writing on The Kill Zone or TKZ. But he’s not just reminiscing about his “journey” or

his favorite writing retreat. Bell (bestselling, award-winning author, writing coach and fiction columnist for Writer’s Digest magazine) is handing out FREE advice about how to write.

His recent post, A New Approach for Plotters, Pantsers, and Everyone in Between, gives writers a fresh new way to look at sagging middles.

A New Look at Midpoints

Last July, Bell blogged about The Magical Midpoint Moment. After watching scores of movies, he realized that their midpoints were not as much externally-driven PLOT points as much as they were internal CHARACTER points—places where the main character reflects on what’s gone before and what’s likely to (or must) happen next. He felt these reflection points were like mirrors inserted into the story.

Bell’s Next Step: The Golden Triangle

He incorporated this idea into his craft workshops and began to flesh it out as a way for both plotters and pantsers to look at developing stories. He now calls his theory “writing from the middle” and of course, there’s a new book about how it works.* 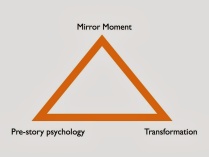 I think Bell’s illustration is crystal clear. The focus of the story should be on what’s in the character’s makeup/past that gets him or her all the way from the inciting incident to the reflection midpoint—and then what changes to the character’s makeup must happen to make the ending possible.

This character-focused way of looking at building story makes a lot of sense to me. How about you?

Besides writing award-winning legal thrillers (both human and zombie), books about vigilante nuns(!), historical romance(!), and short fiction, James Scott Bell is the bestselling author of Plot & Structure, Revision & Self-Editing, The Art of War for Writers and Conflict & Suspense. He blogs weekly at The Kill Zone (TKZ). And, while he’s not technically an editor, Bell is one of the reviewers for TKZ’s really useful—and FREE—First Page Critiques.

*Bell’s new book about the golden triangle and writing from the midpoint is Write Your Novel from the Middle: A New Approach for Plotters, Pantsers and Everyone in Between. Click on the title to learn more about it.

Captivating romantic suspense. History, mystery, and sometimes... a little touch of fantasy.
View all posts by Donna Maloy, Author →
This entry was posted in Uncategorized. Bookmark the permalink.